OUR WOMEN OF TOURISM!

We are celebrating the many faces of the women who make our industry thrive.

If you look close enough to the above image, you will see over one hundred faces of women who work in all different positions, wear many different hats and continue to hold their head’s up high as we continue to fight for gender parity.

Over the last couple of days, we have been overwhelmed as we received images of happy, successful and strong women and we couldn’t be prouder.

Here are a few stories behind the faces.

“Hannah Charnock took a position at Supatramp two years ago as our Marketing Manager. At the time Hannah was relatively inexperienced and did not possess the confidence and skills she has today. Hannah’s passion to learn and acquire new skills coupled with her bubbly personality was exactly what we were looking for our motto at Supatramp when hiring staff is “hire for attitude and train for skill”. Two years later Hannah has flourished in her role, acquiring new skills and an abundance of confidence. Hannah and has been instrumental in assisting the business to grow from one to three corporate stores long with driving our franchising opportunities. She’s a gun!” Mark Fountain, General Manager 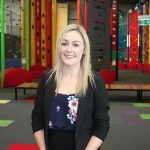 “Karen has been very brave, determined and dedicated to establishing The Hive Gallery in Ocean Grove from nothing into a quality Art Space for everyone to enjoy in just a couple of years” 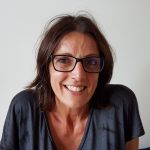 “Kirsty should be recognised for her enthusiasm and passion for her work at The Hive Gallery. She has a wonderful ability to connect with clients and always promotes a fun atmosphere in the workplace”Willie Wildlife Sculptures” 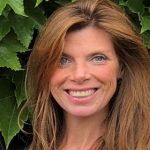 Lisa Cunningham is responsible for all the marketing and bookings at Mustang & Co. We all know a women’s job is never done as Lisa sometimes drives the minibus, drives one of the Mustangs and is also known to be a cruise tour guide for the ships when they doc in Geelong. To top it all off Mustang & Co. have also bagged a bunch of awards!

Deb graduated from studying Hotel Management & Catering at William Angliss and commenced her career in hotel management but soon moved to owning and operating an award winning restaurant. Married a Chiropractor, moved overseas, owned and operated six Chiropractic clinics in the UK and Ireland for 20 years whilst raising 4 amazing children.  Moved back to Australia in 2010 and returned to her love of working hospitality to find herself the General Manager at Queenscliff Brewhouse where she is inspiring the female staff that they too can be leaders in the pub industry.  Granted this should not be a big deal in the 21st century but unfortunately, women are still not represented equally in the highest level of running pubs in Australia. 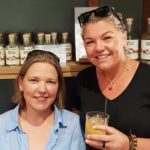 These two amazing chefs work tirelessly to create some amazing food along with chef Carole Dorman Carole is a passionate and creative chef, she takes over from the dynamic duo to finish and serve the food at the events. The three women will be cooking up a storm for the long lunch next Friday at Queenscliff harbour. 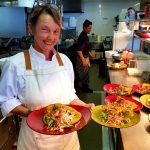 Deb Robinson is the Managing Director of Twisted History, having brought out the company in 2016.   base being ghost tours and paranormal investigations through the Geelong Gaol although Twisted History is spreading its wing throughout the state.  Deb manages the company as well as dealing with secondary progressive MS which has seen a few changes in the last 12 months including some wheels to help her get around! Amazing work Deb, keep it up! 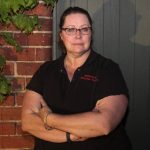 Rache Hely – a woman (clearly) encouraging 50 people on the sand to be brave enough to be themselves! 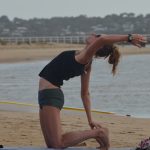 For over 10 years Sara challenged herself in various roles, giving herself a holistic overview of the catering industry, however she knew to succeed she needed to develop her business skills. Working full time, she studied business at night and in 2005 Sara opened her own business ‘Bursaria Fine Foods’.Hard work, passion and dedication has been the key to growing the business from its humble beginnings as a café to being a successful award-winning Australian Catering Company, with over 75 staff, delivering gourmet catering and creative events.

Social media feeds are filled with pieces discussing whether women can really have it all, and memes that ultimately boil down to one message: ‘Girls Can.’ To this, the team at BIG4 Beacon Resort have one response, “Yes we can.”In a group of over 50 employees, more than 90% are female. Personalities and lifestyles are varied, ranging from university students, to working mums and the semi-retired. But at the end of the day, the team’s success can be summed up quite easily. “We all have each other’s backs,”… Read the entire article here 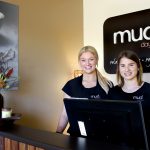 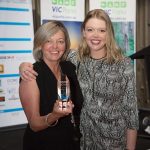 Heather Threadgold, owner and manager of Threading Gold Walking Tours plays two characters on the Geelong 1850’s Murder History Tour. Character one is Mary (a woman who lives in Little Scotland (Geelong West) with her 9 bairns (children) and her husband has left to go to the goldfields and left her on her own as he has gone off with another woman. She works as a maid for a family in (Chillwell)).

The second character is Elizabeth, a lady of the night who comes from the Women’s Factory in Hobart. Geelong 1850’s were hard times and women bore the brunt of living away from the homelands and trying to survive in an era where some were wealthy, yet most were poor. Women ran industries such as inns and hotels, worked as maids, worked the streets and ran the household. Alcohol was a major problem and domestic violence was rife. All these factors in an era where women were married and owned by their husbands and were not allowed to vote, yet they held the city together as they carried on with things despite hardships. 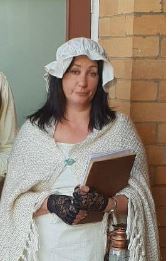 Kelly – Administration Assistant – When Kellys not in the kitchen baking sweet treats for the team to devour, you might be able to spot her smiling face down on the Blues Train making sure all our patrons are having a fantastic night out!
Cabs – Venue/Event Manager – An entrepreneur at heart and a keen follower of trends, she’s constantly exploring opportunities and new ideas, looking for niches or exciting ways to engage with customers, staff and performers to promote artists and improve business. In recent years she’s proud that she’s been able to combine her love of live music & people into the business of facilitating fun!
Kate – Office Manager – When she’s not being adventurous jumping out of aeroplanes around the Great Ocean Road, Kate joins us in the Bay City Events office as our Office Manager. You may also occasionally see her helping out the team on the Blues Train. In 2015 Kate successfully organised and ran her own event in Torquay; Jump For M.S. – a skydiving event raising money for M.S. Research. 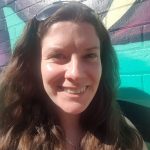 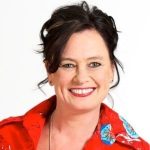 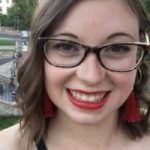 Thank you to everyone who sent us images! Collaboration for The Creative Team Leader

Collaboration for The Creative Team Leader